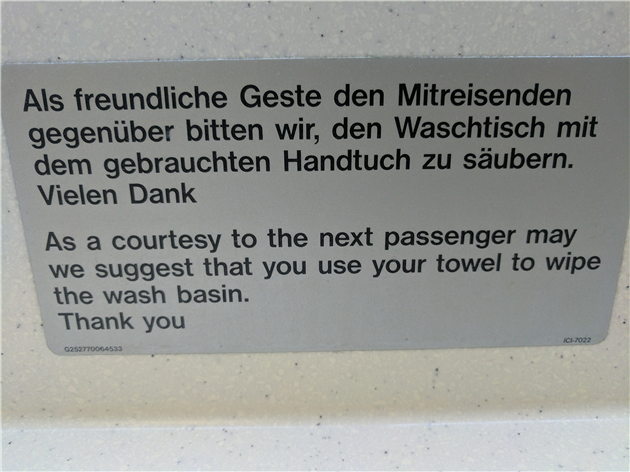 Real Time with Bill Maher is the most excruciatingly awkward show on TV.

The typical setup is that Bill has a first important guest, then three panelists and finally a second important guest. So it kind of sucks to be a panelist. Just by being there you're signalling that you're not important enough to negotiate the first or last slot.

It's not great for anyone though. After the first interview slot Bill is going to jump up and walk over to his desk for the panel session. And you have a horrible choice. Either you follow the stage directions and sit still, somehow emasculated, while Bill leaves you behind. Or you stand up too, asserting yourself but looking somehow awkward and presumably you don't get invited back in a hurry.

Next the panel gets to argue for a while before the second important guest is wheeled in. At this point Bill interviews the newcomer for a long time leaving the panel hanging. Just sat there.

Right when you're wondering if the panel has left the building Bill brings them back into the conversation and at this point they are so desperate to get a few points home that the second important guest is often frozen out.

It doesn't last long though because Bill then cuts to New Rules and ignores the second important guest and the three panelists for a few over-written jokes followed by a variable five minute diatribe.

I cannot believe how many politicians, journalists, comedians, commentators and authors are desperate enough for HBO sized chunks of publicity that they'd put themselves through this social wringer.

Reasonable spy thriller, strangely has a recipe at the end of each chapter which cuts through any tension. You end up wondering what snack in each chapter is going to be featured at the end. Ruins the pacing. Doesn't work as a cookbook either as the recipes omit quantities and cooking time and instead just touch on ingredients and rough technique.

It's a week of dealing with thrilling product deprecations for me. Over the weekend I abandoned CodePlex. Over the past couple of evenings I've ripped out Google Custom Search (they've discontinued their Site Search product and I've never liked Custom Search and I'm now worried that it will be next for the chop). I looked at various open source options but after a bit of poking around decided to just write my own search engine. After about two hours the first version is now live. 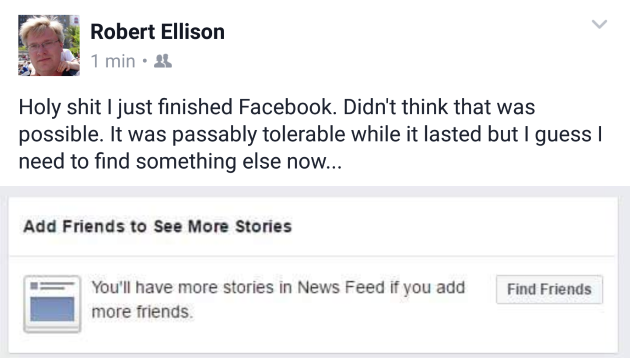 So I'm not on Facebook any more, but while I was, just one time, I reached the end:

Holy shit I just finished Facebook. Didn't think that was possible. It was passably tolerable while it lasted but I guess I need to find something else now...

I imagine a product manager got fired every time that message was shown.

You know how you're debugging and comment out that return statement that stops book reviews from being posted more than once a month so you can get to the bottom of a problem without constantly deleting posts? And then you get distracted and push a new version of the blog software with that return statement still commented out? Thankfully that task is only scheduled to run every four hours. Sorry.