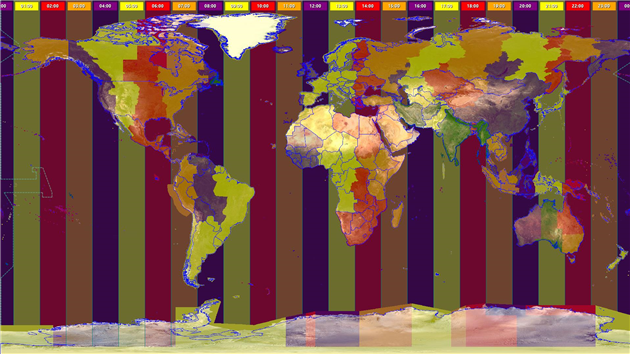 Catfood Earth 3.43 updates the timezone database to 2018e. The big change is that North Korea is moving back to UTC +09 today (May 5, 2018). The time zones layer in Catfood Earth shows the current time in each zone at the top of your screen and color codes each country and region. You can also display a list of specific places (either an included list of major cities or your own custom locations).

Catfood Earth is dynamic desktop wallpaper for Windows that includes day and night time satellite imagery, the terminator between daytime and nighttime, global cloud cover, time zones, political borders, places, earthquakes, volcanoes and weather radar. You can choose which layers to display an how often the wallpaper updates. 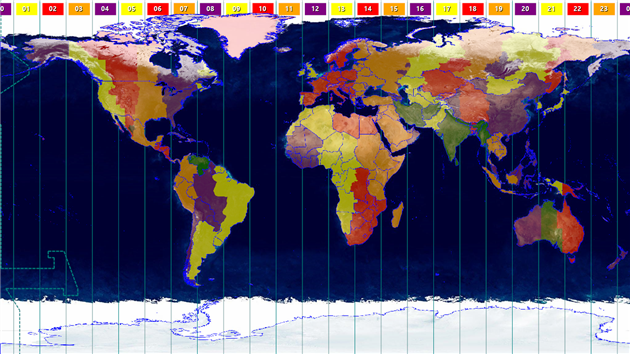 Catfood Earth 3.42 is a small update to the latest (2016d) timezone database and the latest timezone world and countries maps from Eric Muller. If you use the political borders, places or time zones layers in Catfood Earth then you'll want to install this version. 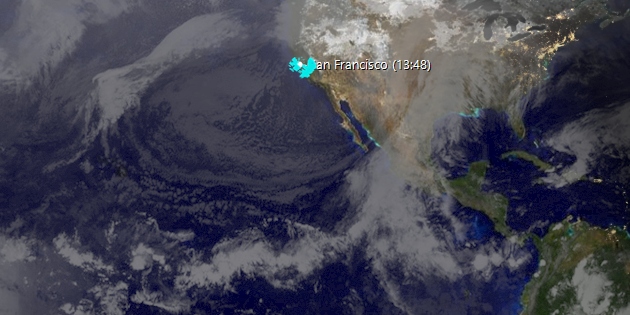 The video below shows twenty-four hours from noon UTC to noon UTC on June 7, 2010 using webcams from the Catfood WebCamSaver database. It proves that I really will do anything to avoid finishing off the new Catfood web site.

You can probably figure out that the three blocks of cams are the US, Europe and Japan. The position doesn't reflect the latitude in this version, it's just a random selection of cams for the timezones represented in the database. As it's July and most of the cams are in the northern hemisphere you'll see long days and short nights. I'll try to remember to create an updated version around the autumnal equinox.

The program that generated the frames ended up being simpler than i thought. Because it's fetching images from a lot of different sources I had a timer creating and then saving a frame once a minute and lots of worker threads fetching the images. Each worker thread is assigned a frame number and once it's got the image it locks the main frame and tries to paints it's own area. If the frame number has moved on the image is abandoned. You can see some of the cams flickering on and off in the video — these went down while the frames were rendering or just took longer than a minute to respond.