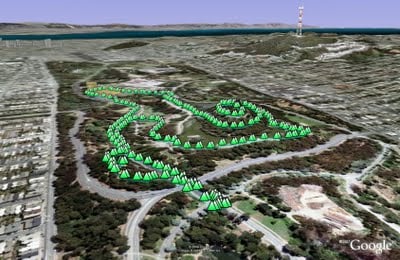 An alternative to our normal loop is another three mile walk starting from JFK and Transverse. Instead of heading towards the beach walk up under the bridge and take the first right to Stow Lake. 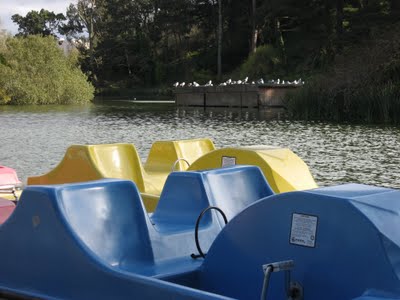 Stow Lake surrounds Strawberry Hill. There's a path around the lake with two bridges leading to the hill. I normally walk to one bridge, cross and then up to the top of the hill. It's generally pretty quiet with great city and ocean views in between the trees. 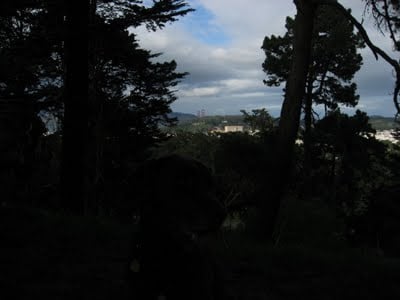 View from the top of Strawberry Hill. Rudy is in there somewhere, click for a larger version. 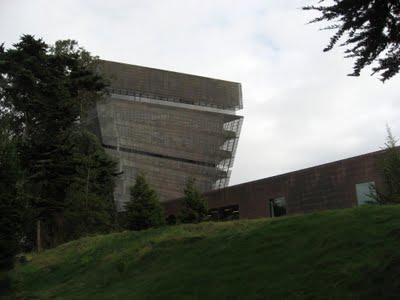 After the hill I walk over to the Museum Concourse. The de Young rises through the trees like an implausibly stranded copper aircraft carrier. It hosts a range of paintings, decorative art, sculpture and modern art. You're bound to find something you like here. 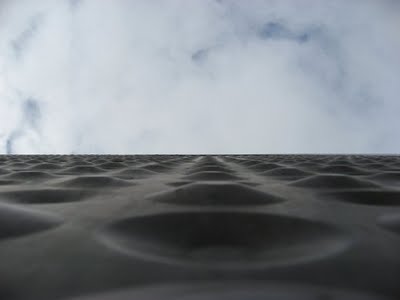 The copper cladding will turn green eventually, probably before the new Bay Bridge span is finished. 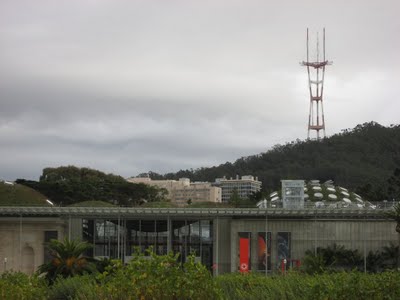 Opposite the de Young is the California Academy of Sciences. The Academy features an outstanding digital planetarium, a three story rainforest and an aquarium. It reopened last year after a major rebuild and it's insanely popular - get there first thing to snag the first come first served planetarium tickets. 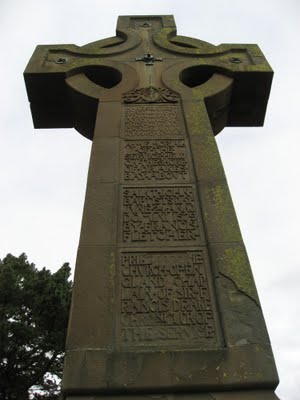 On the way back I detoured up to Prayerbook Cross, donated in 1894 to commemorate the first English sermon on the pacific coast after Sir Francis Drake discovered Drake's Bay (a name which didn't stick). 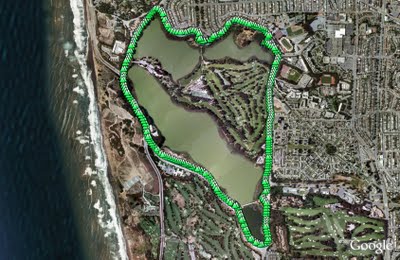 Lake Merced is a natural lake near Fort Funston. It used to be San Francisco's main fresh water supply but is now the emergency reserve (somewhat worrying as a previous earthquake caused much of Lake Merced to drain into the Pacific).

The lake is also the site of the Terry/Broderick duel where in 1859 the Chief Justice of the California Supreme Court (Terry) killed a US Senator (Broderick) in an argument over slavery.

The loop around the lake is a flat five mile path, unfortunately marred by heavy traffic and constant gunfire from clay pigeon shooting and/or the SFPD firing range. 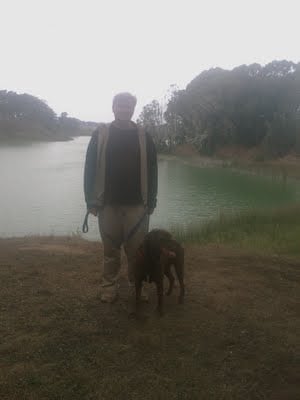 Rob and Rudy at Lake Merced. 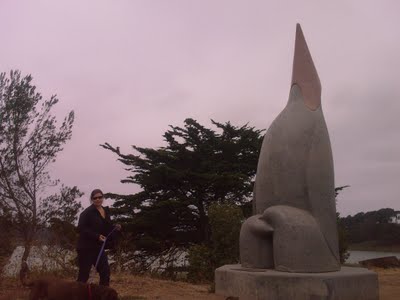 Gill and Rudy next to a sculpture called "Penguin's Prayer". Given the latitude I expect the penguin is praying for the next ice age.

(You might also like: Overvalidation; How to backup Google Photos to Google Drive automatically after July 2019 with Apps Script; Winter Solstice 2015) 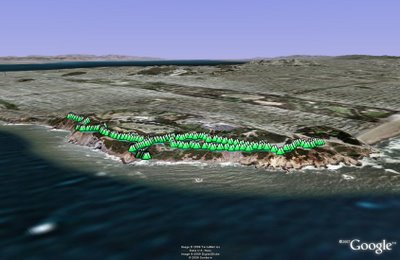 Lands End to Eagle's Point is a stunning section of the Coastal Trail. Park in or near the new lot at Point Lobos Ave and El Camino del Mar. Before or after the walk check out the ruins of Sutro Baths. I'd put some of that American Recovery and Reinvestment Act cash into rebuilding the baths, it looks like they were incredible. 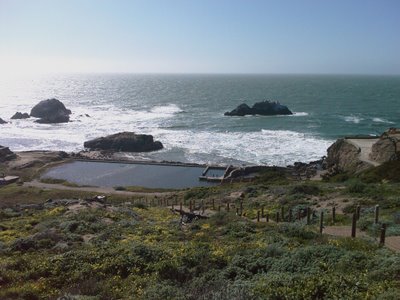 If you follow the trial down the the baths then there's a short but very cool cave to explore which ends in another unique view of the pacific and the mouth of the Golden Gate. 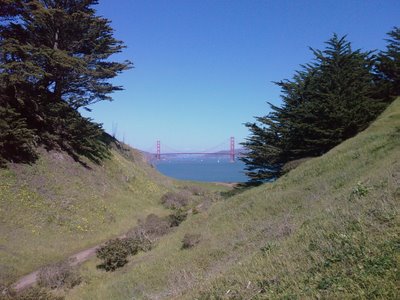 From Sutro Baths follow signs to Eagle's point. There are some very steep cliffs along the trail, so a leash is a really good idea for dogs. 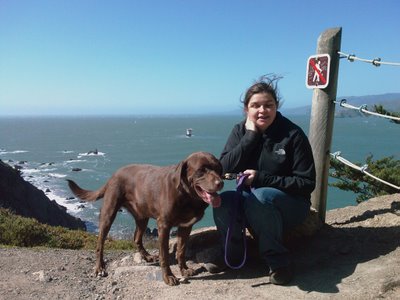 One worthwhile detour is to wonder down to Mile Rock Beach. It's a stony and impressively violent beach with a couple of lookouts on the way down with impressive views. 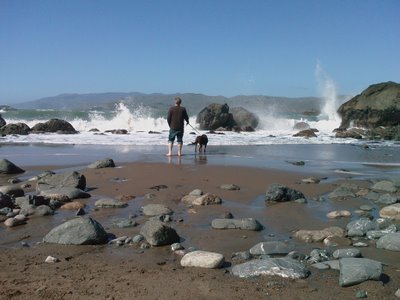 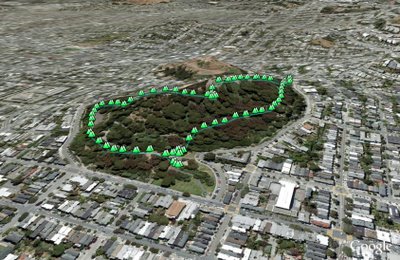 Buena Vista Park is a small but dramatic park above Haight-Ashbury. 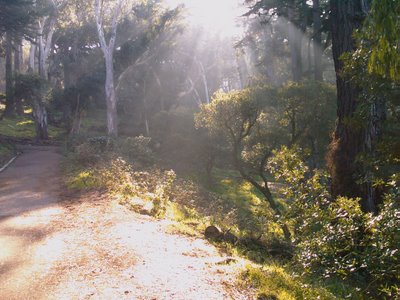 I usually start at Buena Vista Ave and Upper Terrace. Walk up the large path which meanders to a small lawn at the top of the park. 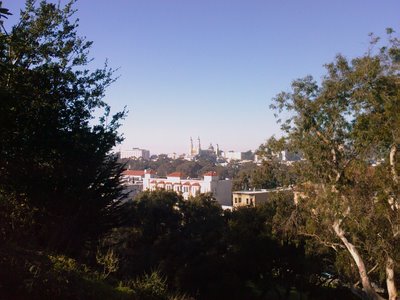 From the lawn walk down through the maze of paths. It's a densely wooded park but every time you walk round a corner you're treated to a different city view peeking through the trees. 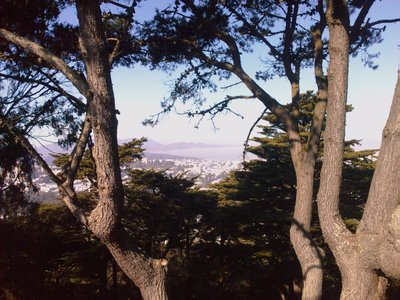 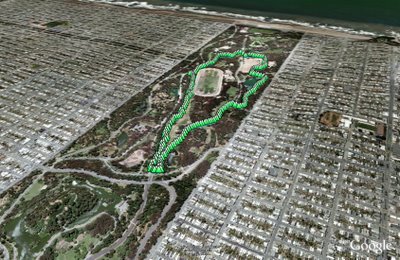 This gentle three mile loop is our favorite walk in the Golden Gate Park. Start at JFK and Transverse and walk down JFK to 30th Avenue. Turn right at 30th and then left onto a metaled path before you exit the path. The path takes you to Spreckels Lake. 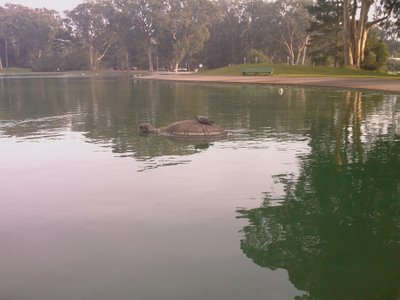 At Spreckels Lake it's turtles all the way down…

Walk halfway round the Lake and then head off behind the bison paddock (over 36th Avenue and then to the right of the restrooms). You'll pass one of two enclosed off-leash dog areas in the park. 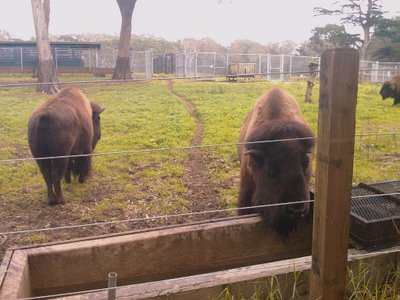 Follow the path right round the paddock and then cross JFK at Chain of Lakes Drive. Immediately turn left on a small path that runs behind Middle Lake. This is a quiet area of the path where we've seen skunks and a lone coyote (although fortunately not at the same time). When you hit a T junction turn left and follow the path behind the angling pond and up to the Polo Fields. Keep going and you'll reach Speedway Meadow. 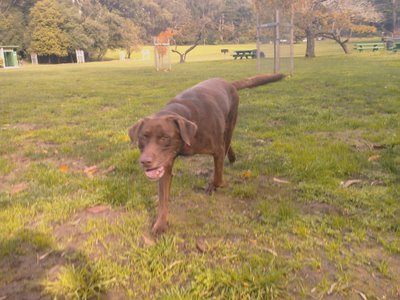 Follow the path beside Speedway Meadow back up to JFK and then on to the starting point at Transverse. 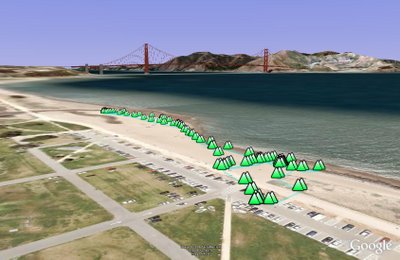 Crissy Field, part of the Golden Gate National Parks, is a recently restored stretch of beach and parkland next to the bay. It's a very popular place to take dogs for a good swim. Currently there is a big debate about dogs in the national parks - see Dog Management at the GGNRA site and SF Dog.

If the weather is vaguely nice then the beaches at Chrissy Field get pretty packed. We go to Fort Funston most weekends, and save Chrissy Field for when the sea is too rough or (like today) when we just can't face climbing back up the sand ladder. 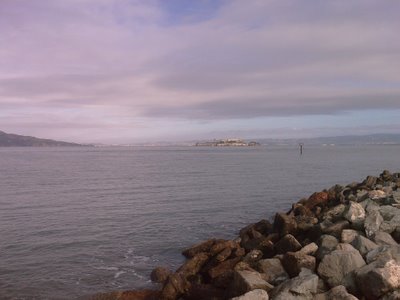 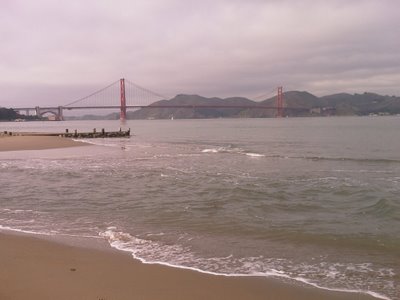 (You might also like: Important to you; A vacation based proof of the many-worlds interpretation of quantum mechanics; Skype for Android - Getting Closer) 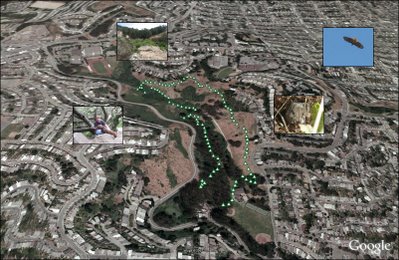 Glen Park Canyon is a short city hike — the trail gets increasingly dense as you walk into the canyon until you need to limbo your way under branches.