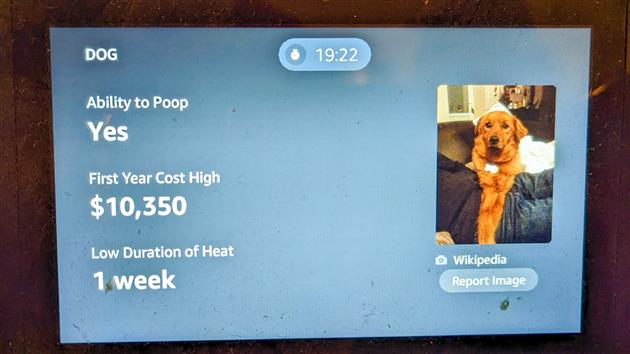 I have had my Echo Show for a little over five years. That's an eternity in AI, you'd expect some amazing advances over half a decade but it's still a timer with a screen.

A timer that you can talk to while your hands are busy or dirty is actually an amazing thing, and it can switch off my Christmas lights without me having to vault a sofa and risk losing an eye. But apparently Amazon isn't making any money from it and so they're laying off staff and paring back their smart home additions.

Possibly they've been working on the wrong thing? When asking about dogs Alexa managed to put them firmly in the camp of things that can poop. ChatGPT says:

"A dog is a mammal and a common household pet, known for its loyalty and ability to be trained. It is a member of the Canidae family, which also includes wolves, coyotes, and foxes, and it is believed to have been the first domesticated animal. Dogs come in a wide variety of shapes and sizes, and they are used for a variety of purposes, such as hunting, herding, protection, and companionship."

That's just a funny bug somewhere. The real irritation is the device getting more aggressive every year. "By the way..." it says while everyone shouts at it to shut the fuck up. Worse, every couple of weeks now they push something new to the home screen. I just want to see my photos and there is now a list of 75,000 adverts to switch off first. And, they've started dropping promotions that can't be switched off in settings as well. So this thing that I bought is so aggravating now that I'll never buy another one.

It could have been different. No, I'm never going to say Alexa, buy me a printer (if you're using text to speech on this post my deepest apologies). But (just one idea) what if I could have a meal planning conversation that adds the ingredients to my shopping basket and the recipes to my home screen? I can then edit the cart before I order and have the instructions on a convenient screen while I cook and listen to a podcast.

Securing the Internet of Things — We can’t trust manufactures to build secure connected devices and so routers need to be updated to solve this problem once per network. The distributed denial of service (DDOS) attack on Friday, October 21 was apparently caused by dodgy webcams....