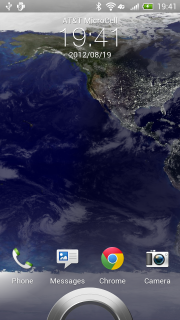 I’ve just released Catfood Earth for Android. It’s my second app created with Xamarin’s excellent toolkit. Being able to develop in C# allowed me to reuse a lot of code from the Windows version of Catfood Earth. The Android version doesn’t include all the same layers (yet) but it’s got the main ones – daytime (twelve different satellite images included, based on NASA’s Blue Marble Next Generation but with some special processing to make them look better), nighttime (city lights, shaded to show nighttime and the terminator between day and night) and a clouds layer that is downloaded every three hours.

My main worry had been that this would suck the phone battery dry, but after a fair amount of optimization it doesn’t even register on the battery consumption list. Grab it now from Google Play ($3.99, Android 2.2 or better).