California, I can save you billions with a small and reasonably priced computer program... 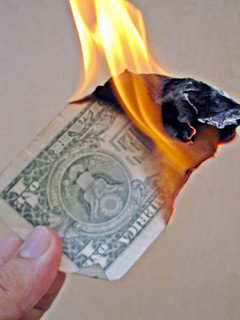 California just canceled a 2 billion dollar project to link 58 courts having spent over half a billion. In the UK half a billion pounds was wasted failing to develop software for the emergency services. A recent although controversial study estimates global IT failures cost 6 trillion dollars a year.

I've thought about this before but perhaps the time is right. It's a software system that analyzes the chances of success for any major IT project. In California in particular we could pass a ballot measure to mandate that this system is used accept or reject any software project that would cost the state more than, say, $50k. The core of the system has already been written and looks like this:

All it needs is a nice interface that allows you to upload documents and then show a progress bar while the in-depth 'analysis' takes place. I'd be willing to do this work for the state for no more than $200 million, plus costs and change orders. Shouldn't take more than a decade either.

The startup costs are too damned high — The Startup Genome people have launched a complicated tool to benchmark your Startup against others. I’ve developed a simpler model. It used to be you spent too much money on Sun and Oracle. Now it’s fighting off patent...