Use WPF Dispatcher to invoke event handler only when needed 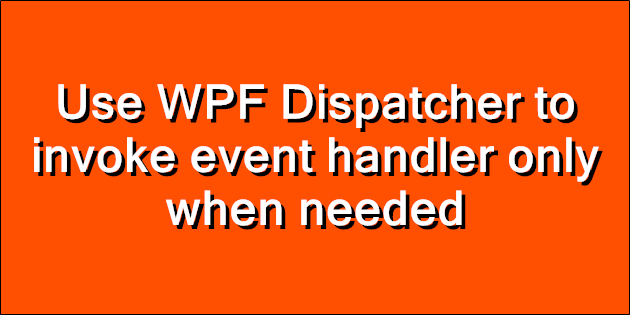 After floundering a bit with the WPF Dispatcher I've come up with a simple way to make sure an event handler executes on the UI thread without paying the overhead of always invoking a delegate.

This has the benefit (for me at least) of being very easy to remember. Hook up the event handler and then if there's a chance it could be called from a different thread wrap it using the pattern above. It's easier to read than an anonymous delegate and much faster than defining a specific delegate for the event in question.

I haven't tested the various methods to see which is the fastest yet… will get round to this at some point.

(You might also like: Cause and Effect, or Strange Skies over San Francisco; Chromecast won't connect to wifi - finally found the fix; Point Reyes Deer)