I agree with you foul stuff and I have to live here all the time! I only drink water now with a slice of lemon. Well apart from the wine, that has escaped its use, so basically my choice of drink is water of wine. What a decision.

I did notice on my visits to the USA that a lot of products have Stevia in, much healthier choice but still has an after taste.

Also, apparently it is either Coke Cola or Pepsi are no longer using Aspartame, except for in the UK, as they want to poison us all slowly! 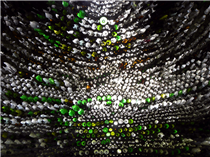 Bottled Water — A company called Evive launched this week to battle the evil of bottled water with reusable RFID equipped bottles that need a special filling station that plays advertising to you while you refill. Sort of like a water fountain but worse in every...