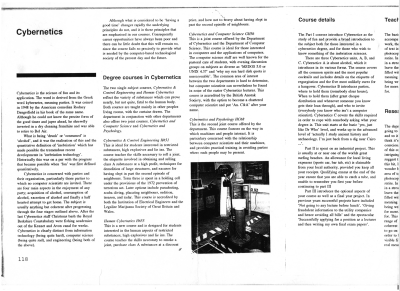 Cybernetics is the science of fun and its application. The word is derived from the Greek word kybernetes, meaning parties. It was coined in 1948 by the American comedian Rodney Dangerfield in his book of the same name. Although he could not know the precise form of the good times and japes ahead, he shrewdly invested in a dry cleaning franchise and was able to retire to Bel Air.

What is being ‘drunk’ or ‘consumed’ is ‘alcohol’, and it was the realisation of this and the quantitative definition of ‘inebriation’ which has made possible the tremendous recent advances in ‘inebriation technology’. Historically this was on a par with the progress that became possible when ‘fun’ was first defined quantitatively.

Cybernetics is concerned with parties and their organization, particularly those parties to which no computer scientists are invited. There are four main aspects in the enjoyment of any party; acquisition of alcohol, consumption of alcohol, excretion of alcohol and finally a half hearted attempt to get home. The subject is usually anything but coherent after progressing through the four stages outlined above. After the last Cybernetics staff Christmas bash the Royal Berkshire Constabulary were fishing academics out of the Kennet and Avon canal for weeks. Cybernetics is clearly distinct from information technology (being quite hard), computer science (being quite sad), and engineering (being both of the above).

Although what is considered to be ‘having a good time’ changes rapidly the underlying principles do not, and it is these principles that are emphasised in our course. Consequently career opportunities have always been poor and will remain so, since the course fails so precisely to provide what is needed by the computer-based technological society of the present day and future.

This is ideal for students interested in restricted substances, high explosives and lie ins. The course teaches the skills necessary to roll a joint, the etiquette involved in obtaining and selling class A substances at a high profit, techniques for demolition of large structures, and excuses for having slept in past the second episode of neighbours. Term three is spent in a holding cell under the provisions of the 1972 prevention of terrorism act. Later options include parachuting, scuba diving, placating neighbours, sedition, treason and radar. This course is accredited by both the Institution of Electrical Engineers and the Legalise Marijuana Society of Great Britain and Wales.

This is new course and is designed for students interested in the human aspects of restricted substances, high explosives and lie ins. The course teaches the skills necessary to smoke a joint, purchase class A substances at a discount price and how not to worry about having slept in past the second episode of neighbors.

This is a joint course offered by the Department of Cybernetics and the Department of Computer Science. This course is ideal for those interested in computers and the applications of computers. The computer science staff are well known for the pastoral care of students, with evening discussions as diverse as ‘MSDOS 5. Or UNIX 4.3?” and ‘why my sun hard disk quote is unreasonable’. The common area of interest between the two departments is hard to determine, but computer scientists can nevertheless be found in some of the easier Cybernetics lectures. This course is accredited by the British Anorak Society, with the option to become a chartered computer scientist and put ‘An. C&A’ after your name.

This is the second joint course offered by the department. This course focuses on the way in which machines and people interact. It is particularly concerned with the relationship between computer scientists and their machines, and provides practical training in avoiding parties where such people may be present.

The Part I courses introduce Cybernetics as the study of fun and provide a broad introduction to the subject for those interested in a cybernetics degree, and for those who wish to know something of the inebriation sciences.

There are three Cybernetics units, A, B, and C. Cybernetics A is about alcohol which it introduces in its various forms. The course covers all the common spirits and the most popular cocktails and includes details on the etiquette of regurgitation and the five most unlikely cures for a hangover. Cybernetics B introduces parties, where to hold them (somebody elses house), When to hold them (after grant cheque distribution and whenever someone you know gets their loan through), and who to invite (everybody you know who isn’t a computer scientist). Cybernetics C covers the skills required in order to cope with somebody asking what your degree is. This unit starts at the basic ‘yes, just like Dr Who’ level and works up to the advanced level of ‘actually I study ancient history and archaeology. I’m just back from a dig near Cairo…’

Part II is spent on an industrial project. This is usually at or near one of the worlds great surfing beaches. An allowance for local living expenses (sports car, bar tab, etc) is claimable from your local authority, provided you keep all your receipts. Qualifying exams at the end of the year ensure that you are able to catch a tube, and unable to remember your first year before continuing to part III.

Part III introduces the optional aspects of your course as well as a final year project. In previous years successful projects have included ‘Not going to any lecture before lunch’, ‘Giving fraudulent information to the utility companies and hence avoiding all bills’ and the spectacular ‘Successfully applying for a position as a lecturer and then writing my own final exam papers’.