I Thought He Came With You (ITHCWY) is Robert Ellison's blog. 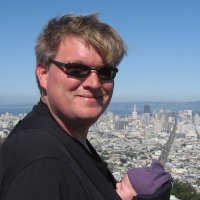 I create software products at various levels of abstraction — including engineering, marketing, product management and business development. Currently I'm an EVP at JustAnswer, where you can pay to get high quality answers from certified experts. I lead customer acquisition, analytics and machine learning. We're hiring!

I was a Co-founder and the CEO of Cucku, Inc. We made an outstanding peer-to-peer backup product called Cucku Backup. Sadly this fell foul of a patent dispute and we withdrew the product as part of a settlement. In addition to Cucku Backup we released an open source tool called StackHash which makes it easier for developers to work with data from Windows Error Reporting.

Earlier still I was lucky enough to spend time at two successful British startups. First at Verifier Systems where I wrote software for robotic semiconductor analysis including electrostatic discharge (ESD) and latch up testing. Verifier was acquired by Thermo Electron which is now Thermo Fisher Scientifc. Then at Ç-Dilla working on license management, copy protection and digital distribution. Ç-Dilla was acquired by Macrovision in 1999.

I have a BSc (Hons) in Cybernetics and Control Engineering from the University of Reading.

You can find more career detail on my LinkedIn profile.

For fun, I'm still pretty geeky. I publish various software tools, games and toys as Catfood Software and have several open source projects on GitHub. I like to hike with a GPS and then write about it later — see my Hike Map. I also read too many books and have a script that pulls in my reviews.

I'm British but an army brat so I grew up all over the place. I've lived in San Francisco since 1999 and became a naturalized US citizen in 2010.