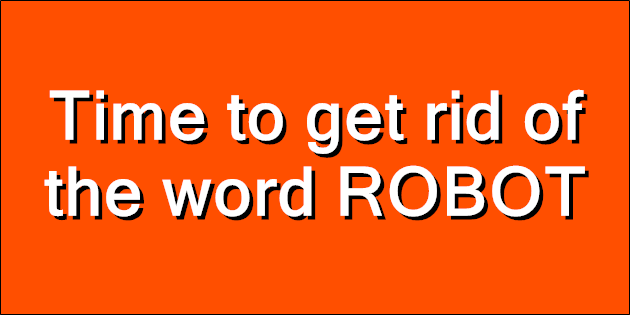 Robot is problematic. Not because it was originally derived from the Czech word for forced labor but because we commonly use it to describe two distinct classes of machine.

The first is a something that is either fully scripted (a Disney ride) or fully operated by a human (a bomb disposal robot). Most 'robots' are like this.

The second is a machine with some autonomy that makes potentially unpredictable decisions based on its programming. Like a Tesla.

If the first one kills you it's either an industrial accident or a person killing you through more levels of indirection than usual. When the second one kills you it's a little murkier. Was it the driver of the Tesla? The programmer? Elon?

I bring up killing because the San Francisco Police Department is claiming the power to kill people with robots on some state mandated paperwork. I'm being asked to tell my supervisor to stop this kind of thing, but on reflection I'm all for it because SFPDs robots are very much the first kind and not the second and we should be far more worried about self-driving cars running us down than a remote controlled wheelbarrow with a shotgun.

I'd prefer SFPD to use lethal force only when absolutely necessary but I really don't think we should constrain how they pull the trigger. Imagine a hostage situation with an active shooter in an inaccessible location. Would you rather resolve the situation with a SWAT team and potentially large scale loss of life or would you use the shotgun equipped wheelbarrow?

But I'm certainly not in favor of Robocop or pretty much anything out of Runaway and so SFPD shouldn't be able to use the word robot to describe their policy.

(Related: 1,000th Post!; Can I move to a Better Simulation Please?; Sod Searle And Sod His Sodding Room)