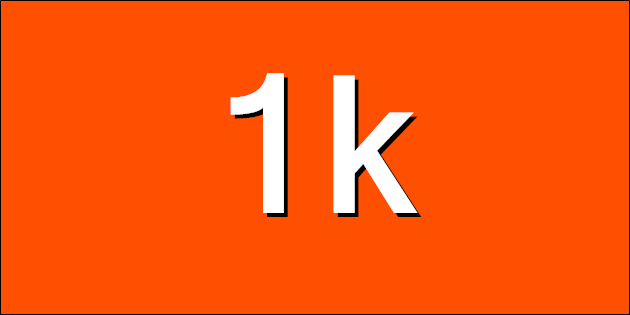 This is the 1,000th (possibly voluntary) post on I Thought He Came With You. To celebrate, here are 17 posts in no particular order from the past 17+ years of blogging.

Methyl L-α-aspartyl-L-fucking-phenylalaninate: What does the UK have against sugar?

How to fix software patents: I co-founded a startup that was killed by a patent lawsuit and so I think it's fair to say I have strong feelings about this. I've had various ideas for improving the system over the years, this one is still the best. It's a radical proposal to stop examining patents altogether, while continuing to protect genuine innovation. Fuck the trolls.

Extreme Environmentalism: Environmentalists are slowly coming around to nuclear power, but is it possible that the greenest thing to do is even more radical?

What do you get when you multiply six by nine? Brexit.: If Douglas Adams were still alive I'm 42% certain this is what he would have written about Brexit. The problems we need to solve a species are better solved together, stop putting the 'B' arkers in power FFS.

The real reason Americans don't have passports: Maybe this is finally going to get fixed, but why can't we overhaul basic government services like other countries seem to manage to do routinely.

ESRI Shapefile Reader in .NET: A shapefile is a common file format for GIS (Geographic Information System) data like county or country borders. I needed to work with this for an update to Catfood Earth and there was nothing that made it easy to just load the data and do something with it. I ended up writing and releasing an open source library which became quite popular. I'm still discovering interesting and/or frightening places where this is used, like laying out power lines or forming evacuation plans.

Bishops: Get them off of the kids and out of my government.

I didn't think I'd ever fall for fake news on Facebook: I discover that I'm just as dumb as everyone else which is a bit humbling. Social media sucks and we should all go back to wonderful blogs like this one. It's a problem that only you can fix - do something like this.

Got It: I hate this trend in interaction design.

Export Google Fit Daily Steps, Weight and Distance to a Google Sheet: This is by far the most popular post on my blog. I think that's partly because Google loves it when you do the hard work of supporting their products for them. It also scratches a real itch for a lot of people who want to liberate their data and so something interesting with it. And I just love apps script which gives you free and easy cloud computing, it's Google at their very best.

Sod Searle And Sod His Sodding Room: So much sloppy thinking about AI. I had lectures about this at university when they should have just had us read Gödel, Escher, Bach instead.

Meeting Defragmenter: I have achieved this vision manually via slow nudges and strategic calendar blocks and it's actually pretty great. You end up with some horrible days and some transcendentally good ones. YMMV.

Reviews and links for March 2011: I still read a lot, but I'm not as good as I used to be at taking the time to write a thoughtful review. Whenever I remember the time I tore Eric Carle (RIP) a new one for The Very Quiet Cricket I make a resolution to start again.

Cam of Fortune!: I so nearly got fired for this, when the Managing Director at my first post-University job got the fax instead of me. He thought it was for real. And then I did this when we moved offices. How did I stay employed?

Lock up the Flexible Spending Account Administrators. It turns out that meaningless paperwork is a worse problem for society than actual serial killers.

Bernal Hill: My very first blog post from August 13, 2005. I had just received a GPS for my birthday and was very excited about getting data from hikes but also very embarrassed about writing anything in public on the internet. I had been online for more than a decade at this point. My first email address was 1991 and my first website 1996 (lost even to the Internet Archive, www.catfood.demon.co.uk). The first thing I actually ever published online (in 1997) was this article exposing something very interesting about the Pentium processor. I wrote this with a friend earlier and it ended up in the first issue of Catfood Magazine. It has been a long time since I've used a stand alone GPS, but I have posted a lot of hikes.

(Related: I Love Email; Got It; The Trust Project, Fake News and a Partial Facebook Uninstall)

The Trust Project, Fake News and a Partial Facebook Uninstall — The Trust Project is a well meaning but doomed attempt to deal with fake news. Facebook, Google, Bing and Twitter are all on board because it's important to be seen to be doing something about the problem.Sarah Perez at TechCrunch...